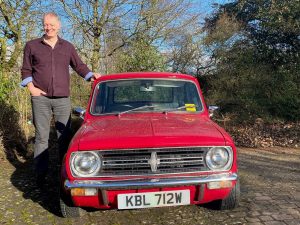 In a career devoted to the aftermarket, Graham’s impressive CV also includes stints at Bearmach, Unipart and Jaguar Land Rover Classic Parts Division, not to mention a previous one at British Motor Heritage where he served as Sales & Marketing Director in the 1990s. His breadth of experience will be invaluable to the company at a time when compelling new opportunities are opening up, and the core business of manufacturing replacement individual panels and bodyshells for the specialist market has never been stronger.

Hitting the ground running, Graham has already instigated upgrades to the company’s systems, software and websites, and laid the foundation for a number of new products. He is also tackling the relationship between BMH and its 60-strong network of Heritage Approved Specialists, about which he says: “There is definitely room for improvement. I’ve worked at the sharp end of the industry and understand their needs. If we learn to listen more and communicate better with them there will be rewards for us all.”

Other challenges on the new man’s desk include the ongoing promotion and protection of some of Britain’s most famous car marques, including: Austin, Austin-Healey, MG, Mini, Morris, Riley, Rover, Standard, Triumph and Wolseley. There is also the task of cataloguing thousands of invaluable original parts drawings from the BMC and Leyland eras. In summary Graham Payne said: “This is an exciting time to be taking the reins of a company that continues to support the traditional classic car fraternity in so many ways, while surmounting such contemporary requirements as the conversion of its bodyshells to electric power. From where I sit British Motor Heritage has a very bright future.”